The Violence of the Pre-Flood World 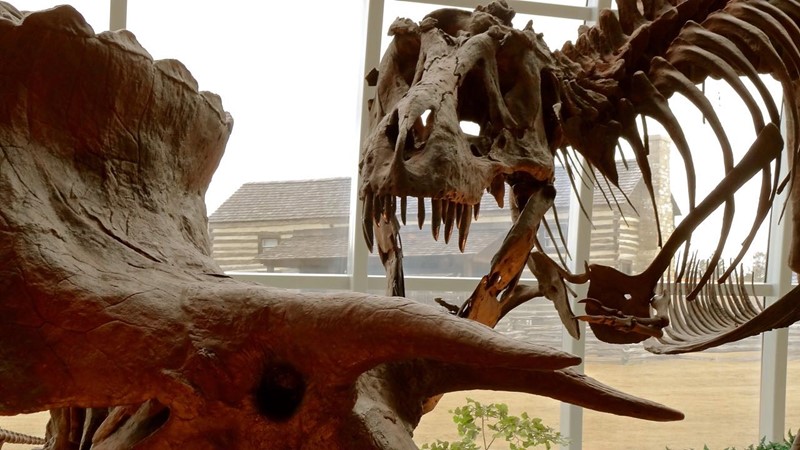 I just returned from a filming trip with Dr. Marcus Ross. We met at the 50-acre Discovery Park of America in Union City, Tennessee. If you ever find yourself near there, it would be worth visiting. Although there are exhibits in many different areas, our interest was in the natural history section with full skeletons of very diverse creatures from T-Rex to Apatosaurus, from Pterosaurs to the Woolly Mammoth and Saber-Toothed Tigers.

Dr. Ross is a paleontologist who has focused his research on dinosaurs. So our purpose for this part of the documentary (Is Genesis History?) was to learn more about that fascinating world…a world that no longer exists. Peter refers to the pre-flood earth as “the world that then existed perished” (2 Peter 3:6) and that God “did not spare the ancient world” (2 Peter 2:5). Clearly, the world that existed before the Flood was very different form the world we live in today. As Dr. Steve Austin and Dr. Kurt Wise explained in earlier filming segments, our common Christian understanding that the Flood simply soaked the earth is all wrong. The crust of the earth broke open and with enormous magma eruptions and tsunami forces of unimaginable size, God essentially remade the surface of the earth…and most probably the atmosphere as well.

The old world was filled with huge creatures; strange creatures. They swam in the ocean, walked the earth, and flew in the skies. The Megalodon shark had a jaw opening of nearly 100 square feet and teeth that were 7 inches long. The “Loch Ness” monster of that world was the Mauisaurus with a neck that was 49 feet long.  On land, the Apatosaurus had a tail that was 50 feet long and was likely used as a defense mechanism, not physically threatening, but it could be “cracked” like a bullwhip and create a deafening boom like a cannon. In the air flew the Pterosaurs. This was the exhibit that fascinated me the most, I guess because of my love for flying. The Pterosaur could fold its wings, somewhat like the F-18 on a carrier, but the pterosaur had hands at this bend, so on the ground they were a quadruped, walking on four “legs”. The conventional paradigm would say that they evolved from land dwellers, somehow growing wings and taking flight. Dr. Ross explained how the pterosaur, like every flying creature, had to have a special hollow bone structure and body and organ design in order to fly. This isn’t a land creature that evolved wings; it was built to fly from the ground up (pun intended).

We talked about the fossil record, how each “layer” has been used to show the evolution of life, but it can just as well show the order of communities of creatures that were swept up in the catastrophe of the flood, beginning with the low-lying marine creatures, and subsequently deposited in the enormous sedimentary layers that we find all over the earth…some layers, like the Redwall Limestone, are up to 800 feet thick. All of these layers are filled with the remains of creatures that were destroyed in the Flood. We walk on top of a literal grave yard. Everywhere.

But, of all we talked about, the complexity of the creatures from the bottom to the top, the grand diversity of life throughout the layers, the lack of evidence for evolutionary development…it was the reason for the destruction of life that ended up being the focus of our interview.

Dr. Ross pointed out that the evidence we have from that world is that is was an extremely violent one. We often think of the violence that seems to be escalating in our current world, but it was nothing to what the ancient world experienced. I had mistakenly thought that God destroyed the world because of the evil of man, and that is true. But Dr. Ross pointed out something very important.

So the Lord said, “I will blot out man whom I have created from the face of the land, man and animals and creeping things and birds of the heavens, for I am sorry that I have made them. Genesis 6:7

God didn’t just destroy man, but animals as well. Why did He do that?

We know that the Fall dropped the entire universe into a world of decay, but we are most familiar with the sin and evil that infected the human race. Indeed, it appears to have been rife:

The Lord saw that the wickedness of man was great in the earth, and that every intention of the thoughts of his heart was only evil continually. Genesis 6:5

But we also know that something happened to the animals. They were created herbivorous, but after the fall were carnivorous. The future hope is that the lion will lie down with the lamb and the cobra will not strike. This is a picture of the way animals were supposed to be. But just as the whole universe fell with Adam and is now groaning in its decay, so, too, did the animal kingdom. Ferocious creatures roamed the earth and swam in the oceans and flew in the skies. Dr. Ross talked about the teeth marks that are found on dinosaur bones.

It was a world and environment that allowed both plants and animals to live long and grow large, but they were infected with the savage disease of the Fall.

It was a world filled with abundant violence…both in man and beast.

And therefore God “wiped them all out”.

Understanding this is critical. Ignoring it is perilous. Peter refers to those who scoff at it, those who close their eyes to the evidence that is obvious...those who "willfully un-see". But he puts it in the context of judgment. If you ignore the judgment of God in the past, when He destroyed the world that then was, then you might think you can ignore the judgment that is coming. Peter mentions that the world was cleansed before with water and it will, in the future, be cleansed with fire.

In between, it was cleansed with blood…the blood of the Lamb.

If one ignores the judgments of God, one will not only ignore the notion of sin, but miss the entire “good news” of the Redemption and the Restoration.

All of this has been preserved for us in the bones...in the earth’s graveyard.

Look at them with wisdom and understanding.

Hummingbird iFlower Sometimes things occur so quickly that you barely have time to register what ...

Just when you thought our culture couldn’t get any crazier, we now have a 47-year-old father of seven...