On the Passing of a Judicial Giant 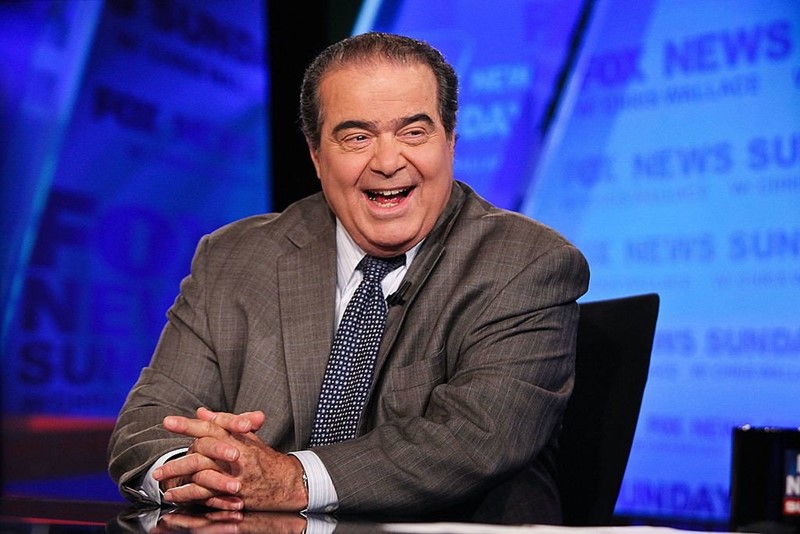 Friday was a dark day for our nation. Justice Antonin Scalia passed away in his sleep. I was stunned and deeply saddened, as were many.

Scalia was the strongest voice on the Supreme Court bench for ruling on cases based upon the original intention of the Constitution. In my opinion, he represented the position that the Founding Fathers meant for the Judicial Branch to have. The Court was to faithfully and fiercely support and defend the Laws of the Constitutional Contract…not make their own or allow any Branch to violate those Laws.

It is difficult to maintain the illusion that we are interpreting a Constitution, rather than inventing one, when we amend its provisions so breezily.

The Constitution is not a living organism, it is a legal document. It says something and doesn’t say other things.

A Bill of Rights that means what the majority wants it to mean is worthless.

…it is not the role of this Court to pronounce the Second Amendment extinct.

As long as judges tinker with the Constitution to ‘do what the people want,’ instead of what the document actually commands, politicians who pick and confirm new federal judges will naturally want only those who agree with them politically. Justice Antonin Scalia

The State Governors should have stood long ago and cracked the whip…not only against federal judicial activism, but also against Executive and Agency Constitutional lawlessness…even when the Court failed to reign it in. The States are the authors of the Constitutional Contract and they have abdicated their oversight role. When the Court overturned the Defense of Marriage Act of over thirty states in its recent ruling on gay marriage, those Governors should have gathered and sent a letter of Nullification to the Court. Scalia recognized the indefensible action that the Court had just taken and that it was nowhere near the Constitutional right of the Court to act as it did:

If, even as the price to be paid for a fifth vote, I ever joined an opinion for the Court that began: ‘The Constitution promises liberty to all within its reach, a liberty that includes certain specific rights that allow persons, within a lawful realm, to define and express their identity,’ I would hide my head in a bag. The Supreme Court of the United States has descended from the disciplined legal reasoning of John Marshall and Joseph Story to the mystical aphorisms of the fortune cookie.

Today’s decree says that my Ruler, and the Ruler of 320 million Americans coast-to-coast, is a majority of the nine lawyers on the Supreme Court. Justice Antonin Scalia

The Supreme Court is supposed to rule on whether or not the case before them represents a violation or conformance to the U. S. Constitution. Instead, it now bends the Constitution to affirm or deny the cases that fit or do not fit their own personal worldviews. This has turned the Court into a highly political body where there are fights over appointments based upon whose “worldview” will be supported by the new justice. This is anathema to the Constitutional design. The Court was to be filled with men of judicial wisdom who would not be bound by a worldview, but by the Constitution.

There is now going to be a fierce battle over Scalia’s replacement. One side will believe, as I do, that the President, in the waning months of his term, should yield the appointment to his successor. The other side will view it as a prime opportunity, with the most liberal President in the history of the U.S., to tilt the court even more toward an activist and therefore liberal majority where, again, rulings will be made, not on Constitutionality, but upon activist worldview preferences.

The President, however, will move to make that appointment. The press will join him in calling the appointment a “moderate” and all the blue forces will rail against those who oppose. There will be charges of bigotry, racism, politicizing, stonewalling, etc. The Constitutional “consent” of the Senate could possibly even be ignored and the President might bypass them, as he has in the past, and make a “recess appointment” of a Supreme Court Justice. If so, it would be the first in the history of the U.S.

In my humble opinion, the simple way to reduce the runaway power of the Supreme Court, and all federal judicial courts, is to mandate that all rulings must be by unanimous decision. This would greatly reduce the over-reach of the federal Courts and leave those decisions, as most should be, at the State level. It would reduce the battle for gaining the political “majority” and increase the possibility that the Court would be reduced to simply ruling on the strict reading of the Constitution; otherwise they would not reach a consensus. But, for sure, I believe the States, in the form of the Governors, are the last hope of providing the proper accountability for a Federal Beast that is acting as if it has no accountability. The States formed the Constitutional Contract; they should send a shot across the bow of the Federal Government when it breaches it.

But for now, there must be a grieving period as we mourn the passing of a judicial giant…a man who refused to fall into the political morass and garner more power for the Court.

In your mourning, think on a few of Justice Scalia’s statements and push with everything to ensure that we get a replacement that thinks in the same vein. Pray that as God has removed a giant, He will now raise up in the place of the one, a host of those who will stand and speak…those who will be moved to reject the call to complacency; those who are willing to fight for what is right; those who see the worth of a nation under God and count the cost of pursuing its health as nothing in light of so great a cause.

That’s the argument of flexibility and it goes something like this: The Constitution is over 200 years old and societies change. It has to change with society, like a living organism, or it will become brittle and break. But you would have to be an idiot to believe that. The Constitution is not a living organism, it is a legal document. It says something and doesn’t say other things.

It is difficult to maintain the illusion that we are interpreting a Constitution, rather than inventing one, when we amend its provisions so breezily.

A Bill of Rights that means what the majority wants it to mean is worthless.

The body of scientific evidence supporting creation science is as strong as that supporting evolution. In fact, it may be stronger…. The evidence for evolution is far less compelling than we have been led to believe. Evolution is not a scientific “fact,” since it cannot actually be observed in a laboratory. Rather, evolution is merely a scientific theory or “guess.”… It is a very bad guess at that. The scientific problems with evolution are so serious that it could accurately be termed a “myth.”

To pursue the concept of racial entitlement–even for the most admirable and benign of purposes–is to reinforce and preserve for future mischief the way of thinking that produced race slavery, race privilege and race hatred. In the eyes of government, we are just one race here. It is American.

Undoubtedly some think that the Second Amendment is outmoded in a society where our standing army is the pride of our Nation, where well-trained police forces provide personal security, and where gun violence is a serious problem. That is perhaps debatable, but what is not debatable is that it is not the role of this Court to pronounce the Second Amendment extinct.

As long as judges tinker with the Constitution to ‘do what the people want,’ instead of what the document actually commands, politicians who pick and confirm new federal judges will naturally want only those who agree with them politically.

For in order for capitalism to work — in order for it to produce a good and a stable society — the traditional Christian virtues are essential.

Bear in mind that brains and learning, like muscle and physical skill, are articles of commerce. They are bought and sold. You can hire them by the year or by the hour. The only thing in the world not for sale is character.

Persuade your fellow citizens it’s a good idea and pass a law. That’s what democracy is all about. It’s not about nine superannuated judges who have been there too long, imposing these demands on society.

God assumed from the beginning that the wise of the world would view Christians as fools…and He has not been disappointed. Devout Christians are destined to be regarded as fools in modern society. We are fools for Christ’s sake. We must pray for courage to endure the scorn of the sophisticated world. If I have brought any message today, it is this: Have the courage to have your wisdom regarded as stupidity. Be fools for Christ. And have the courage to suffer the contempt of the sophisticated world.

A right of parents to direct the upbringing of their children is among the ‘unalienable Rights’ with which the Declaration of Independence proclaims ‘all men . . . are endowed by their Creator.

If, even as the price to be paid for a fifth vote, I ever joined an opinion for the Court that began: ‘The Constitution promises liberty to all within its reach, a liberty that includes certain specific rights that allow persons, within a lawful realm, to define and express their identity,’ I would hide my head in a bag. The Supreme Court of the United States has descended from the disciplined legal reasoning of John Marshall and Joseph Story to the mystical aphorisms of the fortune cookie.

I think the main fight is to dissuade Americans from what the secularists are trying to persuade them to be true: that the separation of church and state means that the government cannot favor religion over non-religion… We do Him [God] honor in our pledge of allegiance, in all our public ceremonies. There’s nothing wrong with that. It is in the best of American traditions, and don’t let anybody tell you otherwise. I think we have to fight that tendency of the secularists to impose it on all of us through the Constitution.

On this day, when we’re celebrating our constitutional heritage, I urge you to be faithful to that heritage – to impose on our fellow citizens only the restrictions that are there in the Constitution, not invent new ones, not to invent the right because it’s a good idea.

Day by day, case by case, the Supreme Court is busy designing a Constitution for a country I do not recognize.

What in the World is a Free Press?

One of the many skirmishes with the current President, and there are many, is focused on the notion of a fr...

George Washington Was Not a Party Animal

I remember the first time I heard George Washington’s Farewell Address. I was stunned. I heard things...