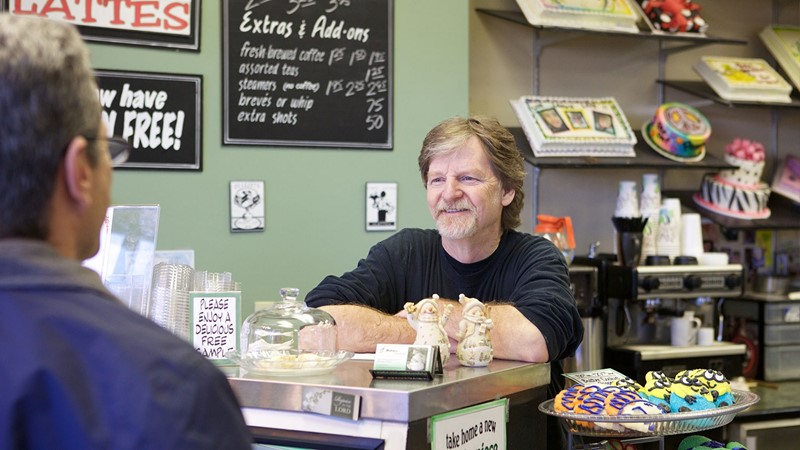 A few miles up the road from me, in Lakewood, CO, a baker is fighting for what he believes is morally right. Jack Phillips, owner of Masterpiece Cakeshop, declined to bake a wedding cake for a gay couple in 2013. The gay couple, rather than respecting his beliefs, took him to the authorities, because this isn’t about getting a cake or flowers or photos, this is about forcing you to bow the knee or pay tribute.

In this case, as well as the numerous ones flaring up around the country, the court is not only wrong, but it’s ruling is flawed. The argument is that Phillips “discriminated” against the couple and that he was in violation of Colorado’s anti-discrimination law because he was “picking and choosing customers based upon their sexual orientation”. But this is in error. Phillips openly stated that he “has no problem serving gay people”.

It is the purpose for the cake that violates his conscience, not the buyer.

I suspect that even if his mother had asked him to bake a cake for a gay wedding, he would have said no because of his Biblical convictions. This isn’t discriminating against someone for their sexual orientation. The ACLU lawyer stated “no one should be turned away from a shop or restaurant because of who they are or who they love.” This is a false argument, because, first, they weren’t “turned away” like someone in the past might have turned away an Indian, a black man, a Jew or an Irishman. Phillips said he would have been happy for them to order or buy anything else in the shop. They weren’t “turned away”, they were denied a specific request. And second, most importantly, they weren’t refused this request because of “who they were or who they love”. It had nothing to do with them, it had everything to do with what was on the cake and its purpose.

If the gay couple had asked for a cake with "Happy Birthday" on it, he would have made it. If they had asked for "Congratulations, Graduate", he would have made that also. But when he is asked to use his God-given talents to produce or support that which he believes is morally wrong, he is bound, before God, to say no. If the gay couple had asked him to portray a gay sex act or if a black heterosexual couple had asked him to portray a heterosexual act, does he not have the right to refuse both on personal moral grounds? In the argument of our courts today, he is in violation of the law if he refuses either, for he would be considered discriminating against gays and blacks.

Does anyone in their right mind think that a black couple who requested this would take the baker to court? Of course not. Just as I would not do so if I went to a baker requesting a cake for my pork luau, and the baker told me he was sorry, for he was Muslim, and he could not in good conscience, depict a pig. I would ask his forgiveness that I had requested this of him, thank him for his honesty, and then seek out another baker.

Now, if Phillips had stated that he wouldn’t serve gay people at all, then I wouldn’t be supporting him either, because, although I personally think he has a right to refuse service to anyone, I think it would be contrary to a Christian worldview to show partiality. There is a difference between “discrimination and partiality” and partiality is morally wrong.

After the court ruling, the ACLU called it a “proud day”. No doubt there was “dancing in the streets” by some. But this is not a proud day. This is a solemn day...as other headlines trumpet the power of the courts over a florist in Washington, a photographer in New Mexico, county clerks in Kentucky and Tennessee, and another baker in Oregon, who is facing a $135,000 fine because it, too, violated her religious beliefs to support a gay wedding. Some have lost their shops; others are faced with losing their jobs, paying huge fines, and some…going to jail.

A proud day? I don’t think so.

I remember seeing pictures of people celebrating in the streets after 9-11. Some thought that was a proud day too. It wasn’t. I pray I will never celebrate knowing that someone else is grieving or losing something precious to them. Our President did this after the Supreme Court Oberfeldt ruling when he lit up the White House with rainbow colors while a large part of the nation was grieving. That was not a proud day, either. It was an unbecoming, "in your face" by a President. Christians should never do this. I suppose one may rationalize it on the football field, but in real life, we should be a people of compassion...resolute for truth and righteousness, but always gracious in victory.

The courts and blue media and academia and Hollywood and much of civil government are aggressively against us...and against a Biblical worldview. It will most likely get even more difficult for us in the days ahead. But, despite this…there remains a huge remnant in the land. Take heart, take hope, take winsome and gracious, but firm, action.

In the upcoming (hopefully and prayerfully) “Engagement” series, the first tour* will examine t...

Ethical Nonsense from an AP Article

Jared Fogle, the advertising face of Subway, pled guilty to paying for sex with minors and for possessing c...